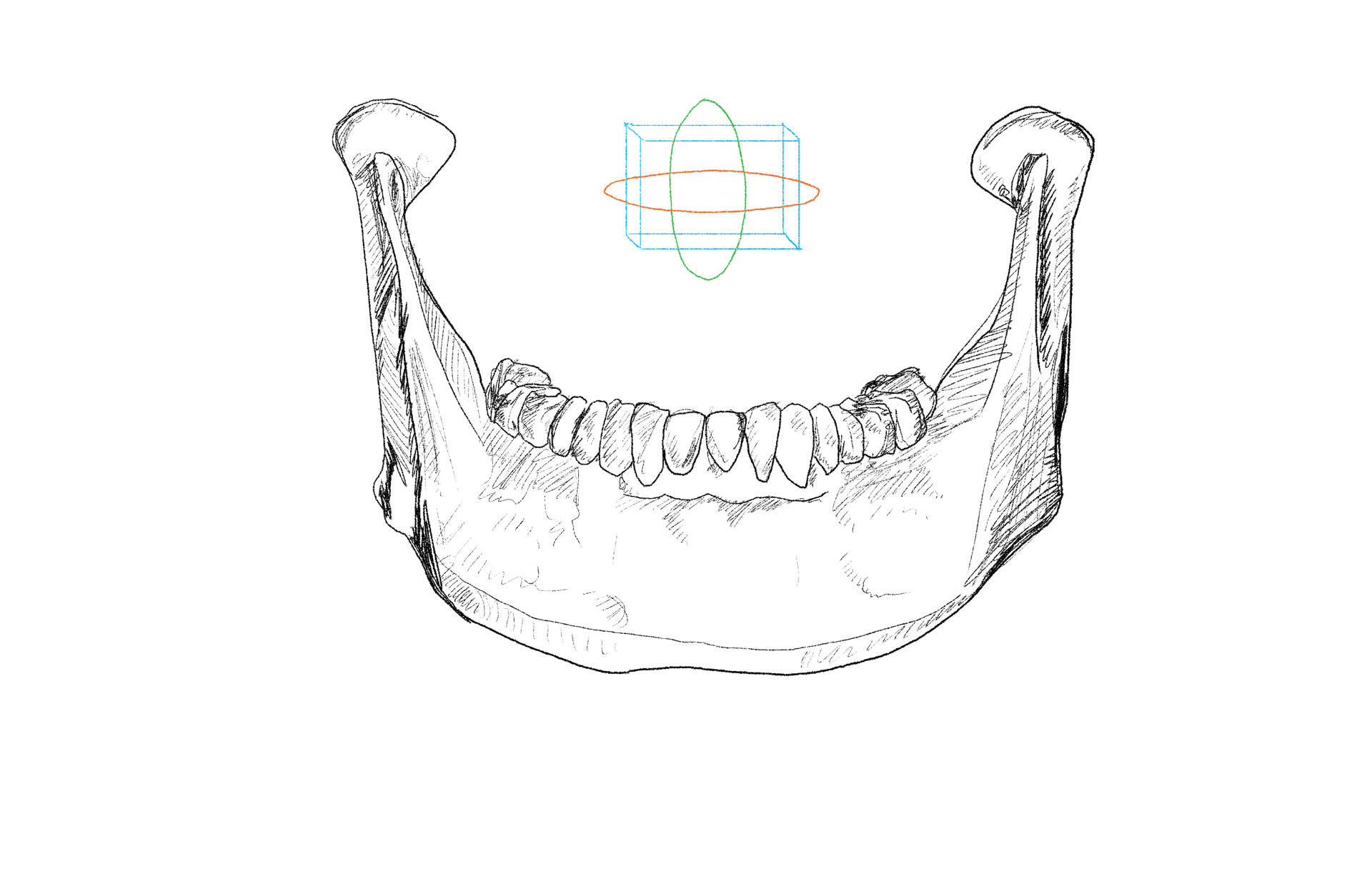 The graphic located between the condyles is an orientation icon used to illustrate the 3-dimensional movement of the mandibular pathway into, onto, and out of MIP. An extension of Posselt’s diagram is overlaying the mandible in space, illustrating its range of motion in all three planes. The 3D spatial orientation of the mandible to the maxilla influences the envelope of motion (blue) to seek equilibrium within functional border positions (red).

Mandibular position, like a number of other automatic somatic activities, is largely reflexively controlled, even though it can be altered voluntarily. Reflex engrams guide the mandible along its favored pathways and digital occlusal force distribution patterns (DOFDPs) provide objective data on the structural obstacles that divert, limit, and/or prevent the mandible from using its preferred pathways of least resistance to and from MIP. In function, the force recorded (within the red zone) influences how the patient, through proprioception, orients the mandible in space (blue) on the way to occlusal contact. Alternately, after the process of occlusion is completed at maximum intercuspation (MIP), the mandible disoccludes, reverses course, and moves back into the envelope of motion.

The receptors of the temporomandibular capsular area appear to be far more important in the control and guidance of mandibular function and position than was previously thought. Much of our knowledge of mandibular position and its regulation was derived from studies of adults. It may be inadvisable to casually apply these concepts to growing children, even if these concepts are correct for adults. According to one author, knowledge about many aspects of developmental mandibular neurophysiology is considered to be incomplete.

When teeth are apart, the mandible in space is controlled by the stomatognathic system which, through its development, assimilates a neurologic process dictating the neuromusculature motor behavior and the temporomandibular joints. Movement engrams in the envelope of motion set up the approach and landing of the mandible into maximum intercuspation, the ultimate ‘stopped’ position. Instantaneously, the direction reverses as the process of disclusion starts. The ‘push-off’ to release contact often times generates the highest force intensity observed during a force cycle. In many occlusions, the force transfer to get into MIP is quick and easily accomplished by the patient. However, the force transfer to exit MIP is difficult because occlusal surface friction prolongs contact release while raising force intensity. This force intensity results in prolonged micro trauma which can deform the involved local structure and induce dysfunction to the overall system.

Dental and skeletal asymmetries that develop from myofunctional habits during growth produce adaptations which will limit the range of motion and create a distinctive Posselt’s envelope. The awareness of the mandible in space during swallowing, breathing, sleeping, and mastication will define a truly individualized envelope of motion. As such, the neuromuscular function of mandibular movement and the functional anatomy of the two TM joints will adapt in structure and shape. Pathologic TM joints create poor condylar orientation and repetitive condylar motion patterns will alter the DOFDPs over time. Conversely, any prolonged, intense force that is either located or distributed throughout the dental arch can change the orientation of the condyles in both glenoid fossae.