It is important that the basic mechanisms underlying function be understood. This requires recognition of the role of force as the most fundamental controlling element of occlusion and stomatognathic function. 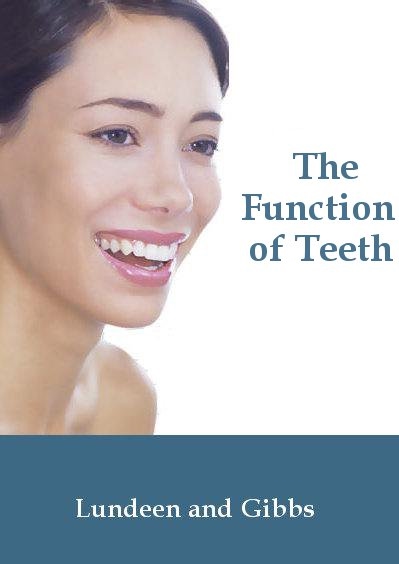 Function is one of the more basic concepts in dentistry because the treatment has to work for the patient to be accepting of the outcome. The details of function within the stomatognathic puzzle are an analysis and execution of orientation procedures designed in harmony and motion. Basically that means, “it works.” It works together for posture, mastication, comfort, efficiency, appearance, swallowing, breathing, lubrication, etc.; i.e. it’s operational.

The word “function” in dentistry is similar to the word centric, in that it is used in conjunction with other words to mean many different things. Harry C. Lundeen and Charles H. Gibbs in their book “The Function of Teeth” describe the concept of a “functionally generated path” that teeth and prosthetics use to flow into and out of contact. The basic idea is taught the first semester in every dental school in dental anatomy. Every cusp and grove has a purpose and every “wax-up” was carved and polished to perfection.

Principles like the ‘Curve of Spee’ and the ‘Curve of Wilson’ are basic and dynamic principles that help teach functional harmony in occlusion and smile design. Another use of the word ‘function’ is ‘envelope of function,’ because the implied concept is generated by movement of muscles and TM joints. Ideas like group function is used to describe a unique style of a functional pathway that helps connect the two movements within the envelope of function.

The word ‘function’ is used in many generic ways to describe movement. The execution of the position of the mandible as it enters and exits the maxilla will be a debate that may never end. The principles are sound, but the execution on humans and the number of variables in anatomy provide many challenges for the word ‘function.’

The aesthetic revolution outlined in the aesthetic concept created a new challenge for dentistry. How do we build glass anteriors that don’t break, chip, crack, fail or fatigue within the function of the masticatory system. What has to happen to the T.M joints, back teeth, and muscles to protect the new ceramic dentistry? Controversially, how can the act of incising and guiding of the newly engineered anteriors enhance and promote a cleaner system under function? Is it possible for a patient who presented with an elective enhancement dream to have that smile without altering the dynamics of the operational system. The answer is “yes” for those who teach functional dentistry.

The profession has always used the phrase “masticatory system function” and when the system breaks down the generic reason is another general concept named “occlusial disease.” The irony or vague use of “occlusial disease” as a general reason for treatment is a good example of the phrase “Functional Fixedness.”

Functional Fixedness is defined as “experimental paradigms that typically involve solving problems in which the subject has the use of a familiar object in an unfamiliar context.” –Wikipedia

Consider the patient as a familiar subject and your familiar object is a crown. The experimental paradigms for treatment is to fit the crown into the subject when needed. Functional fixedness would limit your options if you lost the original purpose of the object.

The historic term “masticatory system function” became the new concept of “functional occlusion” when the bar was raised because of the material revolution and elective appetite of the consumer. All of the great teachers use the words freely and with confidence that aesthetics and function are not only possible and practical, but also have the ability to promote a more efficient system.

Dr. Claude Rufenacht, a German teacher, published the text “Principles of Esthetic Integration” that was translated around the world at the turn of the century. The philosophical transition of integrating dental restorations into the human science of form and function is the foundation for the evolution of new theory and modalities of treatment. (ie functional occlusion).

“Morphology is destiny” (H. Shavell), and so the criteria and characteristics of dentofacial morphological norms are strictly defined according to their ability to fulfill functional requirements. In medicine and dentistry, that is, discrimination between function and dysfunction or between health and disease stands as fundamental and common practice. But the use of these same scientific criteria, which habit has progressively and insidiously instituted, in the discriminating evaluation between the ugly and the beautiful can only result in a confusion of genres.

The functional and esthetic qualities of a form may seem related, but they are far from being based on identical parameters. Functional normality has nothing to do with formal normality, a notion that has always resisted clear definition.

Dr. Rufenacht uses the words “Dynamic Equilibrium” as a definition for the goal of “Functional Occlusion.”

New technology however, does not excuse the dentist from the lifetime study of form and function. The concept of “functional Occlusion” sits at the heart of every dentist with every patient during every procedure. A simple sealant has the potential to influence “Dynamic Equilibrium.” Human adaptation of form and function is directed toward finding its own biologically acceptable dynamic equilibrium. The process of understanding (diagnosis) and correcting (treatment) is a lifetime adventure into the world of “functional occlusion.”